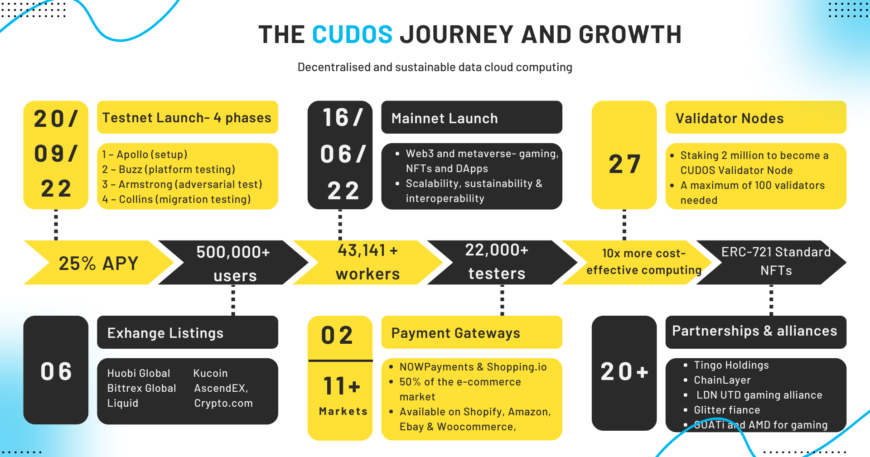 Every journey in our lives begins with a step! And so is the journey of CUDOS blockchain network in 2021. I was fascinated by the story and vision of the Cudos project. We are a the time when global demand for computing resources in terms of chips and server hardware resources is growing partly due to the update of digital-first by most businesses and governments, more citizens now becoming digital savvy with the corresponding rise of emerging technologies such as artificial intelligence, internet of things, Web3 (blockchain and the metaverse).

On the flip side, there is equally an astronomical growth in the data servers and centres to accommodate the digital boom. In 2020, the annual amount of data produced surpassed 35 zettabytes to reach 59 zettabytes, and the IDC projects that by 2025, newly created data will be 175 zettabytes. However, the distribution of these resources is uneven, with some computing servers and devices underutilised while others are paying a high cost to access data servers. This creates the spare capacity puzzle where idle computing resource owners are unable to find users who could take fractional ownership of the idle resource for computing jobs at a lower cost.

Solving the spare capacity puzzle is why the Cudos network was conceived. As a lover and believer of sustainability and a software engineer, this was one of the main reasons I bought into the vision of Cudos. Cudos is a decentralised cloud computing network. We unite cloud and blockchain to make computing sustainably cost-effective. Cudo Compute is an ecosystem providing access to decentralised and sustainable cloud computing resources by leveraging underutilised computing power on idle hardware globally.

The Cudos mainnet was launched on the 16th of June 2022 and the journey has been one of dedication and hard work by the team. Here are some key metrics to note:

The first key milestone in the Cudos journey was the successful run of its public token sale (ICO) in January 2021. This was meant to raise capital to support the team in completing their vision and roadmap as outlined in the whitepaper. The Cudos ICO was oversubscribed by 37% bringing the total amount raised to $$4,100,000 which was the first indicator of a stronger value proposition of the Cudos project. Since then, the journey of an exciting project began. The Cudos Token was launched as an ERC-20 token during the ICO. The token has since been listed on prominent exchanges, including Huobi Global, KuCoin, Bittrex Global, AscendEx and Liquid and Crypto.com. this means that the token is available in over 90+ markets and increases liquidity to support the project.

Since the ICO, the Cudos team began developing the cudos testnet in earnest, as a continuation of the development of the project in 2017. By September, the testnet was launched, with a 4-phase approach.

There were over 22000 testers who helped to provide feedback to the Cudos team during the testnet phase. All these times, the Cudos team issues weekly/monthly developer updates on the progress of testnet development

The Cudos chain is a decentralised network consisting of a layer-1 blockchain smart contract and a layer-2 compute oracle. The layer-1 chain is where transactions and jobs a validated and stored on-chain after the task is completed at layer-2. To maintain a decentralised network, the chain has validators who are the backbone of the CUDOS network. Initially, there will be a maximum of 100 service providers, with a maximum of 1,000 CVNs. Each node needs to stake 2,000,000 CUDOS to become a CVN. The first batch of validators has hardware boxes approved by Cudo. This ensures that the specs allow all the intended work to run smoothly and get rewarded. This was a huge milestone and already with 25 validators which is a great feat.

After rounds of testing through the 4 phases by over 22,000 testers, the Cudos mainnet was launched with great success. What this means is that the Cudos chain went live and started producing blocks and transactions. This process came with significant changes for the Cudos ecosystem.

The Cudos mainnet supports, which is built on the Cosmos ecosystem, support dapps from different verticals such as Gaming/Metaverse, DeFi, NFTs and Oracles. In fact, the possible apps that can be deployed on the cudos network are limitless. The team is ready to work with developers and support them to deploy their solutions on Cudos.

The Cudos is one of the developer tools that help developers build and deploy apps for Cudos. Cudos Blast is a Node.js CLI (command line interface) tool for working with the Cudos blockchain. Developers can scaffold, compile and test your Rust smart contracts. JavaScript and Rust testing is supported. The network also supports the ERC-721 NFT standard with very low gas fees for token minting. The token is now supported on the Keplr wallet browser and app with the Cudos explorer as the tool to use in visualising transactions on the chain. The oracles and infrastructure are being developed.

7. The Cudos Foundation and the Ambassador programme

The Cudos team believes in building blockchain communities and empowering them to contribute in building the Cudos project. There is the Cudos ambassador programme and the Cudos foundation which supports developers, bloggers and other players with resources to build the ecosystem.

I am more than excited about the growth trajectory of the Cudos projects and its potential to solve some of the energy and sustainable questions associated with blockchain. As a developer, I will be happy to contribute to this journey through community engagement and education, building dapps on the Cudos chain while deploying tools and infrastructure to support its growth. Like, all developers should take advantage of the Cudos tools and build sustainably!

Common Tasks and Applications of the CUDOS as Mainnet Launches
Next Post
The CUDOS Network and Ecosystem: The human and infrastructure layers

The CUDOS Network and Ecosystem: The human and infrastructure layers